For years, businessmen who were leading the extraction of the stones in quarries, the owner of the brewery in Lwów as well as the foresters, tourist organizations and local authorities, have been trying to find a way to build a railway line joining Lwówek Śląski and Wleń with Jelenia Góra, and by that, with other important industrial centers. But only on the 3rd of July, 1990 a decision on building a water dam in Pilchowice was made. At the same time, the German government also decided that a railway line, which would transport materials for building the dam, and in the future become the driving force for the local industry and tourism, must be built.

Creating the line on such a demanding piece of land required a lot of effort from the designers and constructors. Construction works started in March 1904. It was necessary to build many embankments, as well as many bridges, one of which would become the biggest suspension bridge in Poland and the only one with an inverted arch structure. This steel truss construction, 130 meters long and roughly 40 meters high over the surface of the water is suspended on two abutments made of sandstone. A splendid viaduct over the highway in Pilchowice was also built. Three tunnels were carved: first, under Czyżyk mountain (187 meters), second under Dworów elevations (154 meters) and, the third and longest one, under the east slope of Góra Zamkowa (320 meters). The rails were brought from B.V.C. Bochum steel in West Germany, located over 700 kilometers away from the building site. Seven train stations were built along the railway line, namely: Jeżów Sudecki, Siedlęcin, Pilchowice-Zapora, Nielestno, Wleń, Marczów, Dębowy Gaj and Lwówek Śląski.

This is what the local press said about the opening of the Railway Line of Dolina Bobru in 1909:

And so the big day has finally come: the Jelenia Góra – Wleń – Lwówek Śląski railway line has been finished. Today, the first trains travel on the whole route, after that, the following lines will be opened: Jelenia Góra – Jeżów Sudecki on October 1st, 1906, Jeżów Sudecki – Siedlęcin on October 9th of the same year, and Lwówek Śląski – Wleń on July 1st, 1909. And the route from Siedlęcin to Wleń, only 10,5 km long, was the most difficult to finish. The 3,5 km long route to Jeżów Sudecki was opened after being built for 19 months, and the 7,5 km long route to Siedlęcin was opened 8 days later. However, it took 4 years and 3 months from the time the construction started for the line Lwówek Śląski – Wleń and 4 years and 5 months for the whole line to finally be ready to open. 33 kilometers in 4 years and 5 months! But today we don’t want to think about how long the construction took. Today we want to finally celebrate our beautiful railway, which should bring new economic and cultural benefits to the localities of the Bóbr Valley, and which is especially important for Jelenia Góra, its departure point. The railway doesn’t run into high mountains but into incredibly attractive areas full of charming landscapes, and we will be very disappointed if that fact isn’t acclaimed soon, especially between tourists.

During the interwar period the railway line was popular with tourists. At the end of the 20s of the previous century, there were more than 20 thousand tickets a year sold at the smaller stations, like Pilchowice, Zapora, Nielestno or Marczów, and more than 70 thousand in Wleń!

After the Second World War, the Regional Department of the State Railways in Wrocław approved the name of WLEŃ station in the circular letter on August 27th, 1945.

The first train on the Jelenia Góra – Wleń – Lwówek Śląski line travelled on November 11th, 1946. Ludwik Kasprzak, who was a mayor at that time, gave the welcome speech, and the station was consecrated by the parish priest of Wleń, Tomasz Strekier. The first-grade students presented the management of the Polish State Railways, who travelled by that train, with a basket of flowers. 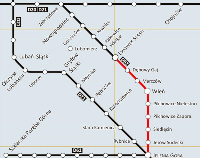 It has been more than 100 years since the Jelenia Góra – Wleń – Lwówek Śląski railway line was opened. Today there are no more steam locomotives travelling there, sometimes we miss them, though. Today, the modern, air-conditioned railcar runs on that route. Quarries are closed, coal is rarely transported. Only the landscape hasn’t changed. The major part of the line runs through the Bóbr Valley Landscape Park. Many views you can see out of the windows are breathtaking, like a winding stream tens of meters below, or the landscape visible while the railcar travels right next to the torrential river, or passes through the bridge hanging over the Pilchowickie Lake.

Till this day, travelling by Bóbr Valley Railway is a popular tourist attraction. It is, after all, the most beautiful and picturesque railway route in Poland.