Nowadays, Wleń municipality has 4464 inhabitants and it covers the area of 86 km2, out of which nearly 35 % is covered by forests. The location of the municipality on the border between the Jizera and the Kaczawskie Foothills results in a diversified land form. Numerous hills and valleys, rises and glens, crossed by mountain streams create a unique microclimate and provide inimitable views, which allows us to link the future of the region with the development of tourism. The municipality in 70% is located inside the Bóbr Valley Landscape Park, the axis of which is the River Bóbr. In Ostrzyca, a place near Wleń, in 1962 a reserve was created, mainly for the preservation of the relic of the Tertiary volcano with its unique basalt stone runs. The reserve was also formed for the protection of rock plants growing on the top of the hill. “Castle Mountain” Reserve, which was formed in 1994, aims to protect valuable plant species and monuments of material culture. Paths around the reserve lead among extremely interesting oak-hornbeam forests and during the roam we can observe protected plants, e.g. bear garlic, martagon lily, spring snowflake or ivy. Both of these reserves are included in the protected areas of “Natura 2000” program where they are referred to as “Ostrzyca Proboszczowicka” and “ Ostroja nad Bobrem”. 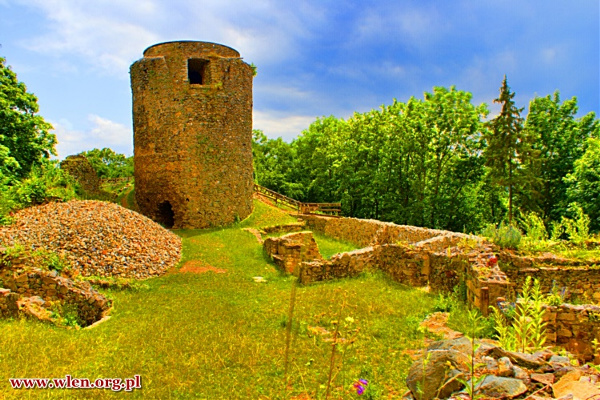 Diversified landform of the area favors tourism. The territory is crossed by hiking trails: “Na Koniec Świata via Cervimontana” trail, established in 2008 and leading to the end of the world, blue [E-3] European Long Distance Trail (Atlantic Ocean - Black Sea), The Piast Castles Trail (the green trail), the yellow trail leading from Nowy Ląd, through Lwówek Śląski, the area of Wleń municipality, Okole to Świerzawa, the black trail leading from Marczów to Płoszczyca, which ends meeting [E-3] and [ER-6] Euroregional Tourist Bike Trail ‘The Valley of the Bóbr River’. There is also an educational trail of St. Hedwig following St. Hedwig’s footsteps and leading to the castle hill, a nature-educational trail “Góra Gniazdo” and - slightly forgotten - “Śliwkowa Ścieżka”, which leads to Marczów.